Jacksonville woman is making a

COCONUT CREEK, Fla. (Feb. 1, 2012) — Life for several families is looking a lot brighter thanks to a dedicated donor by the name of Barbara Gilbert who raised funds to build a village for the destitute in St. Catherine, Jamaica, through Food For The Poor.  Barbara’s Village was completed in June of 2006 and was soon followed by the Ellerslie Gardens Soccer Complex. Now, Gilbert is working on raising funds for the completion of the Celebration of Life School and the Musical Band Youth Program.

Gilbert’s commitment to build a school in Jamaica began with her first mission trip with Food For The Poor nearly nine years ago.  With many visits to follow, it was on one of these trips in the summer of 2005 that Gilbert met a couple from Laramie, Wyo.  Rich and Mary Guenzel were very impressed with Gilbert’s passion to help the poor and recently decided to donate a $12,000 matching gift challenge for the second phase of the school’s building fund.

“God has blessed us with the resources to be able to contribute to Phase II,” said Rich Guenzel. “We have been following the progress on the fundraising for the Celebration of Life School and have remained in contact with Barbara since our first trip with her.”

The Guenzels became fast friends with Gilbert and traded many stories, including one about their 13-year-old nephew, Thomas Park, who was battling cancer. Touched by Thomas’ story, Gilbert reached out to the boy via email and the two of them became buddies through his hospital care page. On the day Thomas completed chemotherapy, Gilbert informed him that she had decided to name the school in Jamaica Celebration of Life School in his honor because this survival story was a celebration of life.

“Never underestimate the power of what one passionate person can do,” said Angel Aloma, Executive Director of Food For The Poor. “Barbara has an exciting personality and an extremely big heart, what she’s doing in Jamaica is truly amazing, especially when you take into consideration that this is a woman of modest means.”

Gilbert who works as a waitress at Beach Diner, located in the Mandarin area of Jacksonville, isn’t modest when it comes to getting what she wants. It’s at the restaurant that this 56 year-old single mother of four earns much needed tips to fund her projects in Jamaica.  But, Gilbert isn’t just any waitress. In the spring of 2009, at age 54 she was accepted into the graduate program at Florida State University.  She earned her Master’s Degree in Social Work on December 17, 2011.

“It is never too late to earn an education. During my journey towards my degree, it was important for me as a social worker to advocate for education for the poor,” said Gilbert. “In my travels to Jamaica I have witnessed the passion the children have for learning. There are teachers, but not many school buildings.”

Gilbert will be celebrating her 57th birthday on Feb.18, which is also the target date to raise the total funds needed to complete the second phase of the Celebration of Life School in St. Catherine, Jamaica.  To help Barbara meet this challenge, donations will be matched dollar for dollar until the $23,280 goal is reached.

You can help Gilbert meet this challenge by visiting her Champions For The Poor page at www.foodforthepoor.org/barbara.

Food For The Poor, the largest international relief and development organization in the nation, does much more than feed millions of the hungry poor in 17 countries of the Caribbean and Latin America. This interdenominational Christian ministry provides emergency relief assistance, clean water, medicines, educational materials, homes, support for orphans and the aged, skills training and micro-enterprise development assistance, with more than 96 percent of all donations going directly to programs that help the poor. 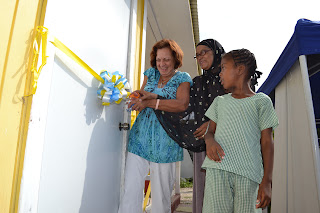 American single-mother of four, Barbara Gilbert, has given Jamaica, a gift that keeps on giving – loving, caring voluntary service. This week she, her family and friends are in the island feeding the homeless, and have also helped to construct a Computer Laboratory and perimeter fence at The Celebration of Life Ar-Rahman Kindergarten School, Windsor Road, Spanish Town.

This is not the first time that this philanthropist is touching the lives of the students and teachers of that early childhood education institution. In July 2011, Food For The Poor built the new school through donations from Ms. Gilbert. She also participated in the construction of the school. Ms. Gilbert and her family have given ongoing support to the institution through the donation of educational supplies.

This week’s trip to the island by Ms. Gilbert is part of her annual ‘pilgrimage’ to Jamaica to assist the less fortunate and vulnerable. Jacqueline Johnson, Executive Director, Food For The Poor (FFP) Jamaica, has commended Ms. Gilbert for her “tradition of selfless voluntary service to the less fortunate,” and for her charitable efforts in building, expanding and improving the Ar-Rahman Kindergarten School.

The new Computer Lab built by FFP will benefit the 31 students, their teachers and members of the Windsor and Hill Run communities. Today, FFP also equipped the Lab with N-Computing Kits.

The FFP Jamaica Executive Director hailed Barbara’s labour of love as being “so contagious, that it has infected all her family members, including her son, Steven Walker, who has played a pivotal role in the construction of the Computer Lab.”

From the diligent fundraising efforts of Ms. Gilbert, since 2006, FFP has built over 85 houses for poor Jamaicans.  In that year, the first set of houses constructed, were officially named “Barbara’s Village”, in her honour. Ms. Gilbert has also financed the development of a football field in the Ellerslie Pen area of Spanish Town.

Deeming Ms. Gilbert “an architect, not by profession, but by service”, Mrs. Johnson has commended Barbara and her family for extending kind hearts and hands to Jamaicans over the years. She opined that the following words of Cory Booker, Mayor, Newark, New Jersey, aptly describes the exemplary way in which Barbara Gilbert and family have shared and related to the people of Jamaica: “ ‘Before you speak to me about your religion, first show it to me in how you treat other people. Before you tell me how much you love your God, show me in how much you love all His children.’ ” Ms. Johnson appealed to citizens to emulate Ms. Gilbert and her family in their own communities across Jamaica.

Nathalie Carlisle, Vice President, Major Giving, FFP Inc. also lauded Ms. Gilbert. She pointed out that most of the people who contribute to the Food For The Poor Projects are not rich, but are working class people like Barbara Gilbert, who are struggling to make a living. Ms. Carlisle urged the children to excel as their way of showing appreciation to the donors.

Ms. Gilbert who was the Keynote Speaker at Thursday’s Dedication Ceremony affirmed her commitment to continue to help the poorest of the poor in Jamaica. Pointing out that although she has no biological family in Jamaica, she gets fulfilment and great joy by helping to improve the lives of Jamaicans. “I love you and that’s why I continue to do the things I do – you are my family! I have a giant family in Jamaica,” declared Ms. Gilbert. She announced that one of the latest initiatives she is implementing in Jamaica is a music project, in which she and her friends donates musical instruments to FFP Jamaica, for the musical training of children from inner-city areas, including Barbara’s Village. Ms. Gilbert has named that initiative the “Jeff Band Project” in honour of visually challenged musician and cancer survivor, Jeff Meadowell, who is helping the less fortunate on the Rosebud Indian Reservation in South Dakota. He has also donated some of the instruments to the “Jeff Band Project” for Jamaica and Guyana.

Ms. Gilbert’s son, Steven Walker, who is a computer whiz and in whose honour the Computer Lab was named, implored the children to follow their dreams. Steven who is physically challenged, pointed out that he knew through experience that the possibilities are endless in what you can achieve: “There is no boundaries to what you can achieve in this world.”

Among the speakers at today’s event were: Father Paul Wilderotter and Wardah HoSang Millerdean, Principal, Celebration of Life Ar-Rahman Kindergarten School. She conveyed appreciation to the donors and disclosed that the community would be able to benefit from the Computer Centre for their homework and Internet needs. Entertainment was provided by the students of the Ar-Rahman Kindergarten School, and the youngsters from the Food For The Poor Summer Band Camp (which includes children from “Barbara’s Village”).